Interview with Guy Kawasaki: On the Future of Inbound Marketing (2020) 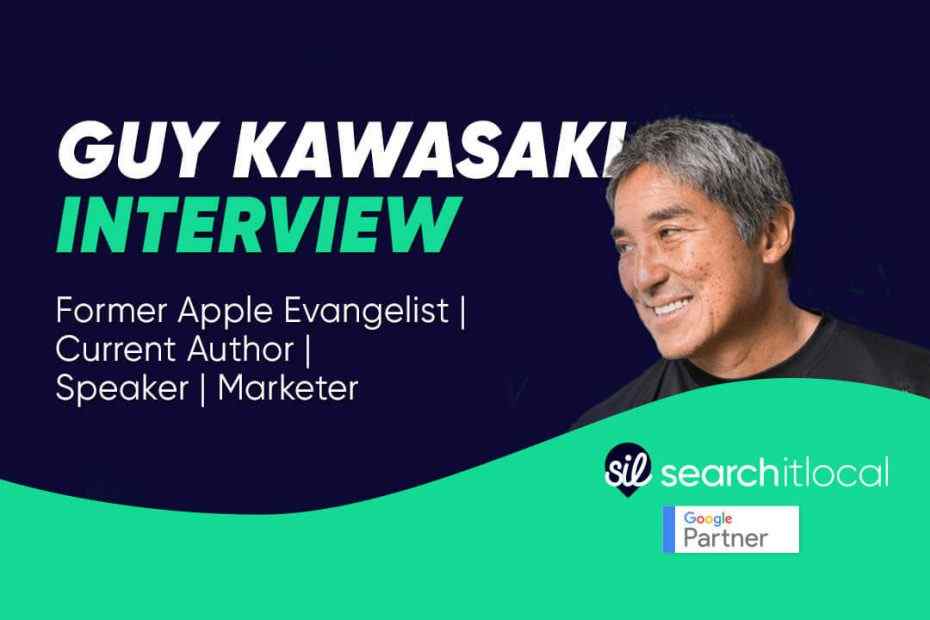 A Silicon Valley icon, Guy has had a long and successful career in marketing and tech, as well as helping to pioneer the concept of ‘business evangelism’.

In addition to his personal and professional accomplishments, Guy is well known for his connection to Apple, having been involved with the tech giants across two separate periods of employment, and was a member of Apple’s original Macintosh team from 1983 to 1987.

Currently the chief evangelist of Canva, an Australian online graphic design tool, he is also a brand ambassador for Mercedes-Benz, and an executive fellow of the Haas School of Business (UC Berkeley).

An accomplished author, he’s shared his insights and life lessons across 14 bestselling books, the most recent of which – Wise Guy: Lessons from a Life – is his most personal and revealing yet.

With this latest book a personal collection of experiences that have enlightened or inspired him, it includes a reflection of his years with Apple and his time working alongside Steve Jobs, which felt like the ideal place to start our interview.

Some of the topics we explore include:

Guy, thank you so much for taking the time to chat with us at Search It Local today.

Now, I want to start off by connecting a line between marketing in the past and marketing in 2019 and get your insight into the way our industry has changed.

You were one of the Apple employees responsible for marketing the Macintosh computer line in 1984, how do you see marketing as having changed between then and now?

There have been three major changes.

First, ubiquity of computers and Internet access. We had copper-wire based telephones, airplane tickets, gas credit cards, and fax machines back then. There wasn’t video conferencing, email, and everything else we take for granted today.

Second, social media was non-existent. The closest thing that eventually appeared was CompuServe and AOL. Social media is fast, free, and ubiquitous. It’s much easier to reach the masses.

All told, how hard could it be to be a marketer today?

You’ve said before that your role in the 80’s was “changing the world with the Mac”.

Do you believe Apple is still changing the world in 2019 and if so, how?

Apple changed the world by upping people’s expectations of ease of use and convenience of devices as well as how devices are purchased and serviced. There’s no going back on expectations at this point.

Apple has also set a high bar for itself. It’s not enough for Apple to merely stuff better chips, batteries, and SSDs into devices. People expect it to create new categories, not just evolve products. This is the true test – maybe the Apple Watch is an example of this.

But the point is that Apple has to create products that make people want to give up their Macs and iOS devices and wait overnight at Apple stores.

Let’s stay with Apple, a company you’ve said has ‘defined your career’ during your time as a software evangelist. It’s clear that Apple is a great example of well executed marketing.

On numerous occasions the death of Apple was predicted, only for the company to emerge stronger. In your opinion, what mistakes do you see businesses in 2019 making that place their future in jeopardy?

The mistake that companies continue to make is refusing to catalyse and embrace cannibalistic products.

Can you imagine the Kodak engineer who did this approaching his management and telling them, “I made something so that people don’t have to buy film anymore!”? I bet that went over big, and yet the failure to embrace a cannibalistic product meant the demise of Kodak.

What companies have to grok (understand intuitively) is that the purpose of cash cows is to nurture calves – not to be ‘udderly’ drained dry.

Moo-ving on from that subtle pun I hope our audience picked up on, a recent study showed that consumers wouldn’t care if 77% of everyday brands suddenly disappeared. This speaks to the relevance and value of brands.

What advice would you have for businesses and entrepreneurs who want to make themselves indispensable to consumers?

First of all, that kind of study is dubious. Were the subjects college students earning credits?

It’s one thing to say they don’t care if 77% of everyday brands disappear, and it’s another to deal with this actually happening. I don’t believe this number.

That said, there’s no such thing as an indispensable brand. The sun will rise no matter what, and something will fill the vacuum. But the point of your question is not to dispute the question.

The way to create something that is at least very valuable to people is simple: great products or services that are well supported.

With the way technology has evolved – and this can be seen in the rise of voice search technology, the growing adaptability of AI, and a shift towards personalisation – what advice would you have for marketers and business owners yet to embrace technology?

Can it be true that there are any marketers and business owners who have not embraced technology at all?

My advice would be that they ask themselves if they want a future. I mean, maybe they just want to run a small business, retire at some point, and shut it down. That’s cool. That’s their prerogative.

But if they don’t want to be a Kodak, Blockbuster, or Remington-Rand, they need to get with it.

I’d love to dive into your mindset for a moment. Going back to your first job at Nova Stylings selling jewellery, what do you believe the secret to selling is and can it be applied to any industry?

There are three keys to selling.

Any two of the three is probably sufficient.

This is so easy to list, and so hard to do.

You graduated from Stanford in 1976 with a major in psychology, how has this helped you throughout your career and can you pinpoint any moments where you relied on your understanding of psychology to get ahead?

I can’t establish a direct line from a degree in 1976 to where I am today.

If you’re trying to say that I had a plan to go into marketing, so I majored in psychology, you’d be giving me too much credit.

I majored in psychology because it was the easiest major I could find at Stanford.

You’ve had two periods of employment with Apple that you refer to as ‘tours of duty’.

If you were about to embark on a third ‘tour of duty’ to lead Apple’s marketing in 2019, what changes would you make and why?

It’s more likely that I will become a professional surfer than I return to Apple.

I’ve never met Tim Cook, and he probably doesn’t even know who I am – or was. But running marketing wouldn’t interest me.

I don’t need to work there. I just want someone who asks these kinds of questions:

You’ve said that evangelist marketing, which you helped pioneer at Apple, is “when you convince people to believe in your dreams as much as you do.”

How did this concept come about and what advice would you have for business owners and entrepreneurs looking to stoke the same belief in their own audience?

Mike Murray, the former director of marketing of the Macintosh Division came up with the title in the early 1980s.

It represents the belief that Macintosh wasn’t yet another personal computer. It was a religion – or at least a belief that there was a better way to design computers so that “the rest of us” could be more productive and creative.

You see, evangelism comes from a Greek word that means “bringing the good news.”

Macintosh was good news, not just a personal computer.

The key to stoking belief in your customers is quite simple: make a great product.

That’s 90 percent of the battle. If you do this, you won’t be able to prevent the creation of evangelists for your product.

Guy we always end each interview with the same question, tell us something about you we don’t know.

You’ve obviously had a highly successful career and remain at the forefront of tech evangelism, so what is something about you that our audience would not know?

This is a harder question than you might think. I’m a WYSWYG (What You See is What You Get) kind of guy. I don’t have any juicy secrets – in fact, my latest book, Wise Guy: Lessons from a Life, lays just about everything out there.

Here’s a tidbit: I’ve bought eight surfboards in the last three years. And this doesn’t count the three boards that were given to me.

I know I said that was the last question I had for you but I’m intrigued now and have to know, what’s your new book about?

There you have it everyone! Guy Kawasaki thank you so much again for taking the time to sit down with us at Search It Local today.

And for anyone who’d like a little more insight into Guy’s book, here’s all the info you need to know.

Wise Guy is Guy’s most personal book. It’s not a traditional memoir but a series of vignettes. He toyed with calling it Miso Soup for the Soul because these stories (like those in the Chicken Soup series) reflect a wide range of experiences that have enlightened and inspired him.

In total, Guy covers everything from moral values to business skills to parenting.

As he writes, “I hope my stories help you live a more joyous, productive, and meaningful life. If Wise Guy succeeds at this, then that’s the best story of all.”

This interview was conducted by Search It Local’s Alexander Porter

Looking for more inspiration from the best and brightest minds in the industry?

Want FREE leads for your business?